4th of July gives neighbors a reason to celebrate together, build community

The 4th of July is a perfect opportunity for grass-roots community building .

Jessica Draggoo sent me some photographs about a bike parade and potluck that took place Tuesday in their Manhattan Square neighborhood in East Wenatchee. Heather Stringer and Darcy Poland were two of the lead organizers of the event. The Poland family hosted the post-parade potluck.

Stringer, who moved to the valley last year with her husband Dallas, has been looking for opportunities to get better acquainted with their neighbors. She and Poland dreamed up a 4th of July bike parade that eventually morphed into a community block party and potluck.  Apparently, people living on the street have tried in the past to organize neighborhood events but to no avail. It seems that the bike parade idea broke the ice and got people involved. Everyone enjoys seeing kids on bikes, Stringer surmised.

“I was really impressed with all the decorations and energy,” said Draggoo. “The neighborhood community really came together and created a parade complete with decorated bikes, pets, strollers….we even had a flag team.” Draggoo’s mother-in-law Nancy Draggoo came all the way down from Tonasket to help with decorations and be part of the event.

Stringer hopes that other neighborhoods might follow suit and create fun ways to get together, get acquainted and share life together. Her husband Dallas is the pastor at the Eastmont Baptist Church. Knowing the neighbors was a rich part of the Texas experience that they would love to see more fully developed here, Stringer told me.

Building these connections in neighborhoods is something that builds community resilience. It’s nice to see the front-porch neighborliness being rekindled. 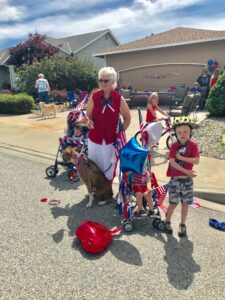 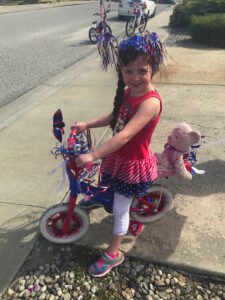 Ella Stringer decked out for the bike parade 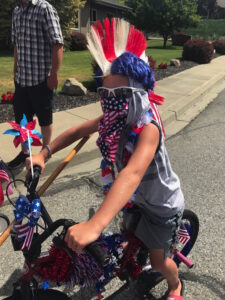 August Poland with his patriotic Mohawk 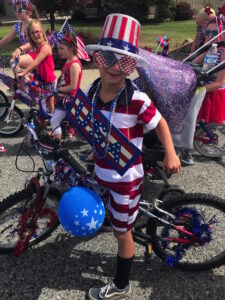 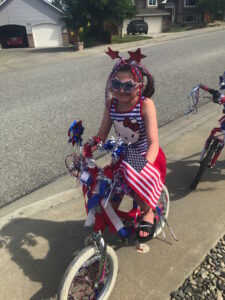 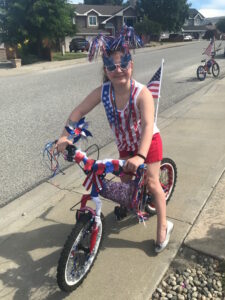