The Wenatchee North Rotary Club has taken a major step forward in its community-building efforts. On Tuesday, the club officially launched its own foundation with a $50,000 gift from member Earl Tilly and wife Barbara.


Other service clubs have used foundations to significantly enhance their philanthropic efforts, a point emphasized by Beth Stipe, executive director of the Community Foundation of North Central Washington. The Rotary funds will be invested with the Community Foundation, which manages funds for numerous nonprofits and families throughout the region. An astounding total of $67 million is invested with CFNCW.
Wenatchee North Rotary’s signature program is the North Central Washington Sports Awards banquet. Rob Tidd, the club’s membership director, tells me that the organization has given out more than $350,000 in scholarship funds over the years.
The foundation board is just getting organized but has an immediate goal of matching the $50,000 by the Tillys, who have been stalwart community builders in our valley, through Rotary, Habitat for Humanity, Packing Friendship and numerous other endeavors.
One of the advantages of developing a foundation for the club is that it will allow the organization to receive tax-deductible donations, which is a significant incentive for potential donors. “I view this as an opportunity for us to do more, “ said Earl Tilly.
I love the sense of contribution that exists throughout our valley in service clubs, by nonprofits, businesses and individuals. The lead gift by the Tillys to get this foundation rolling is another example of putting service before self, which happens to be the Rotary motto. 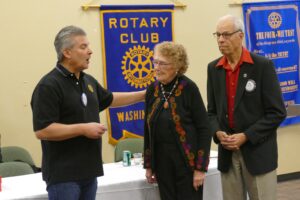