[podcast src=”https://html5-player.libsyn.com/embed/episode/id/5041309/height/90/width/450/theme/standard/autonext/no/thumbnail/yes/autoplay/no/preload/no/no_addthis/no/direction/forward/” height=”90″ width=”450″]
It is stunning to realize how many talented musicians who have grown up here or moved to the valley. This region is chock full of great talent and their talents make major contributions to the cultural and social life of our community. North Central Washington is a place of tremendous creativity.

I recemtly had the privilege of getting acquainted with Ron Bermingham, the current director of our famous Apollo Club, a men’s chorus that has been going strong since 1910. Under Bermingham’s leadership, the Apollo Club is branching in a new direction with a joint concert with Wenatchee Big Band — A Cool Winter’s Night: Jazz at the PAC, on Saturday, Feb. 11, at 6:30 p.m. That should be quite an event. Bermingham is a big believer in collaboration to spark greater creativity and a stronger sense of community. No wonder we hit it off in our interview.

Bermingham has an impressive background in music and theater. For spent 25 years as an opera singer early in his career and then went back to graduate school and began conducting and teaching. He then landed at the New Orleans Center for the Creative Arts, a high school dedicated to help high school students express themselves through performance. After Hurricane Katrina devastated the area and many of its students left town in the aftermath, Bermingham went on to manage orchestras in Baton Rouge, New Orleans and Shreveport and taught music at Centenary College. He has a tremendous background that can be of benefit to our local music scene.

A family connection brought Bermingham and his wife to our precious valley. Daughter Michelle Bermingham, an opthamologist, moved to Wenatchee to take a job at Confluence Health and her husband works in information technology in the Eastmont School District. Ironically, they left the land of hurricanes and arrived in forest fire central — pulling into town a few days after the devastating Sleepy Hollow blaze, Bermingham recalled.

He directed Chicago at the Numerica Performing Arts Center last summer and orchestra member Tammy Kintner told me it was apparent from the first rehearsal that he was a talented musician and also an engaging leader — a very special talent. The Apollo Club was at the time looking for a conductor and that was a perfect fit, said Bermingham. He participated in a men’s chorus in college and the powerful sound is something that has stayed with him to this day. It creates a unique experience for the performers and audiences.

Bermingham told me that there is a special chemistry that happens in a community chorus like the Apollo Club when there are a mixture of talents and abilities. He pairs stronger musicians with those who are not as confident and that works quite well, he said. The combined concert with Wenatchee Big Band was something that had been talked about for years, Bermingham discovered. He saw an opportunity with the collaboration to bring opportunities to perform different kinds of music and he sees other opportunities for the Apollo Club to share the stage in coming years.

He’s looking forward to directing Young Frankenstein for Music Theater of Wenatchee this spring. “The talent level is so deep in this community, Bermingham said, far beyond what a community of our size might be expected to produce.

It’s great to see the 117-year-old Apollo Club finding new energy and stretching the limits under new leadership. We’re fortunate to have Ron Bermingham in our midst. Make sure to get tickets for the joint Apollo Club/Wenatchee Big Band concert by visiting numericapac.org. 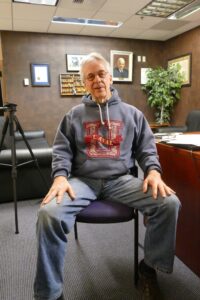 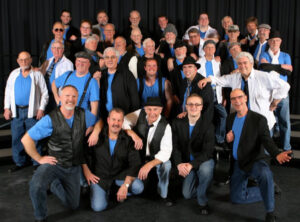