The gift of a kidney: Wardell receives organ from acquaintance Jill Maloney

WENATCHEE — Longtime Wenatchee attorney and former Chelan County Superior Court judge Carol Wardell has a new lease on life, thanks to the kindness of a casual acquaintance who took the extraordinary step of offering to donate a kidney to save Wardell’s life.

The kidney donor is fellow Wenatchee Golf & Country Club member Jill Maloney. When Maloney first read a December, 2015 Wenatchee World article about Wardell’s need for a kidney from a live donor, she was inspired to try to help. Maloney went through an exhaustive battery of psychological and physical tests before being accepted as a donor.

Wardell, who suffers from a genetic condition that has slowly been destroying her kidneys, went public a little more than a year ago in hopes that a live kidney donor could be found. Wardell admits that she went public with a some trepidation — she’s keeps her emotions close to the vest and doesn’t like asking for help. But live kidney transplants are rare things and, given Wardell’s heart issues, a live donation was the best option and that meant she needed to motivate people to consider the extraordinary gift of an organ.

The transplant took place at Virginia Mason Medical Center in Seattle on Tuesday, Nov. 29, but it almost didn’t happen. The Monday before Thanksgiving, Wardell and Maloney went to Confluence Health for a final blood test. The next day, Wardell got the shocking news that the surgery was being called off because the blood test had revealed a previously undiscovered sensitivity to an antigen in Maloney’s blood.

I had been preparing to write the happy story that Wardell was going to get her transplant. That Tuesday, Wardell sent me a note saying that surgery was called off and asked me to hold the story. “I’m so beyond consolable right now,” she told me in an email. Maloney said she felt equally devastated at not being able to give the gift of a kidney. “I went into a total funk,” Maloney recalled. This was the low point of Wardell’s emotional rollercoaster.

Also disturbing for Wardell was that although she knew that though other potential donors were in the wings (more than six friends, acquaintances, nephews and one person Wardell had never met had volunteered), it would take months to go through the whole process of matching again. Meanwhile, her kidney function was seriously diminished and dialysis to keep her alive would have been necessary. It was far better to get a kidney without being on dialysis because of how hard that is on the body, Wardell said.

Recipients don’t always know the people who donate live organs — the donor ultimately decides whether to make contact or not. For Maloney, there was never a question that she wanted Wardell to have her kidney and also wanted to share the experience.

She reached out and the two became close friends, sharing their passion for life, wine, food, golf and the love they each have for their husbands. Their husbands — Larry Maloney and Kurt Mack — shared the roller coaster ride with them. Mack confirmed that there were highs and lows on the journey that he shared with his wife. “I’m not going to say it wasn’t stressful,” said Mack in his typically understated fashion.

When we sat down for the interview in the living room of Wardell and Mack’s East Wenatchee home, Carol and Jill were like sisters sitting on the couch, sharing memories of the crazy journey and the experience of being in the hospital together.

As the surgery approached, their thoughts turned to each other. As she was being wheeled toward the operating room, Wardell recalled asking medical staff to make sure that Maloney still wanted to go through with the operation. Maloney had been told multiple times that she could pull out of the surgery if she wanted, but Maloney did not waver. “From day one I felt a connection to Carol,” said Maloney. Even though she wasn’t living in the valley full time, she appreciated Wardell’s generous spirit.

Said Wardell: “For me it was really emotional. It was overpowering to say the least that Jill was willing to go through this (the surgery) knowing what she would encounter in surgery and recovery.” The surgeon said the kidney Maloney donated was exceptionally healthy, Wardell said.

It’s been nearly two months since surgery and both are progressing well, although Wardell’s face is still puffy because of the steroids she has been prescribed. There’s a funny story about that — Wardell has been known to be a little intense at times and Mack told the doctors that maybe they shouldn’t be giving her steroids. Medications will be part of her life from now on.

Wardell and Maloney want the community to know how much they appreciate the love and support they both have received. The surgeons at Virginia Mason were astonished that Wardell had so many potential local donors — apparently, that’s unheard of.

Both Wardell and Maloney wanted to acknowledge the professional and compassionate care they received from the entire Virginia Mason transplant team. Wardell was told that the doctors felt comfortable with her release because the nephrologists in Wenatchee are very good and the teams at Confluence and Virginia Mason coordinate on a regular basis.

Maloney and Wardell wanted to tell their story in part to encourage others to make medical contributions. People can donate organs when they are alive or after they pass away. Virtually anyone can be a regular blood donor.

Would Maloney give her kidney if she could do it over? “In a heartbeat,” she said. She has no more kidneys to give but she intends to make more typical contributions to make the community a better place. 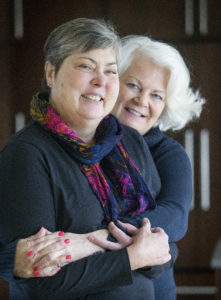 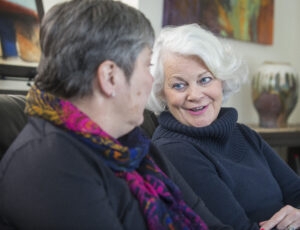 1/17/2017 World photo/Don Seabrook
Carol Wardell, left, East Wenatchee, talks with Jill Maloney who donated one of her kidneys to Wardell in late November of last year.