Wenatchee’s downtown is beginning to come alive with new possibilities for historic buildings thanks to the example that is being set by developer Rory Turner and his growing list of local investors.
When Turner and his wife Laurel moved to the valley in 1995, they made a conscious decision to try to bring a lively, urban vibe to their projects here.
That approach is having a discernable impact in the properties that Turner is involved with, including the old Wenatchee Hotel building at the corner of Wenatchee Ave. and Orondo Ave, and now the Metropolitan Building at Wenatchee Ave. and 2nd St., formerly called the Dore Building.


I sat down with Turner recently to try to understand his unique approach to property development and why he chooses to view success as achieving a healthy financial return for investors while improving the neighborhood and community. You can listen to my complete interview in my podcast at artofcommunityncw.com or via iTunes
Turner has won a couple of statewide awards for his work, including the redevelopment of the Elks Building in Ellensburg. That building, which had been the center of Kittitas community events for 75 years before sitting empty for the better part of a decade. The pigeons had taken over the building, which seems to be a frequent part of his redevelopment projects, Turner told me with a laugh.
Everyone in town expected the building to be demolished, but Turner discovered that the building was structurally sound. “We went down there to make a real estate investment and we ended up becoming part of that community and having a responsibility to return that thing back to what it could be,” Turner said.
Now the refurbished building is the center of events for the valley and a deal is being developed that there is a plan to put a boutique hotel next door, he said. That could add up to a $12 million economic development shot in the arm for the community.
Turner thinks adaptive reuse of old buildings makes great financial and community sense and thinks Wenatchee has the potential to build out another 150,000 square feet of space of upper floors in downtown Wenatchee. It will take flexibility and creativity to make that happen, but it is possible, he said.
Another advantage of restoring old buildings is that rather than just doing building assembly of modular sections built elsewhere, the vast majority of the work requires local contractors, increasing the value to the local economy.
When Turner and his partners go into a project, they try from a design standpoint to strike a balance between the historic features and modern amenities.
In the Metropolitan Building, which houses the stunning new Wenatchee Valley Chamber of Commerce Visitor Center, they exposed the massive support columns to give the flavor of the old building, along with modern amenities.
The trick with historic buildings is that few businesses need wide-open, large spaces. So he and his team work to carve smaller spaces that create opportunities for new and emerging businesses to locate there.
Tenant mix is another of Turner’s secrets. He’s intentional about bringing together tenants that can work together collaboratively and also making sure that there is a funky or cool urban vibe. In the Wenatchee Hotel Building, he mentioned the Sidecar Lounge, Cupcake Blues and the India House restaurant as examples of seeking out tenants who bring something special.
The Metropolitan building has a few more spaces for lease, and he’s working on another ethnic restaurant. The upper floor has been sold to Goodfellow Brothers Construction, which is going to make a significant financial investment and move its headquarters and 45 jobs to downtown Wenatchee.
Turner owns or has an interest in other key properties in downtown Wenatchee, including the historic Exchange Building next to the Convention Center, the SeaFirst Building where Washington Federal Bank is located, the Fuller-Quigg Building at the corner of Wenatchee Ave. and Palouse St., and the building that houses Caffe Mela.
Through his partnerships, he’s building the awareness and knowledge of other local investors about the value of restoring historic buildings — what he calls adaptive reuse.
The term community builder also fits his wife Laurel, who is the executive director of the Women’s Resource Center and is making her own significant contributions to housing the homeless.
Here are my takeaways from my time spent with Rory Turner: There is incredible untapped economic value in the historic, underutilized buildings in our communities if thoughtful investments are made with an eye toward developing long-term value for the community. Furthermore, cities need to find creative ways to encourage developments that create long-term assets for our valley. 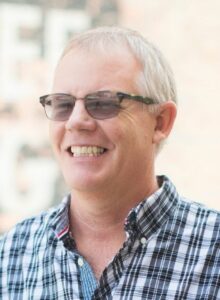 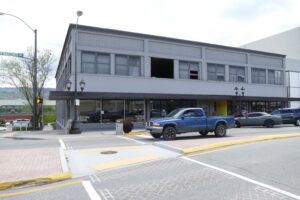 The former Dore Building, now being restored and renamed the Metropolitan Building 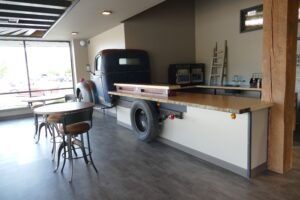 The new Wenatchee Area Chamber offices in the Metropolitan Building