The most effective leaders in our community are invariably the ones who are humble and unassuming. They shun the spotlight, preferring that others get recognized, and simply work like crazy to make a difference.

The Women’s Resource Center of Wenatchee recognized three such leaders on Friday night at the Wenatchee Golf and Country Club. Sara Rolfs was named Woman of the Year and Jim and Karen Russell were honored as Philanthropists of the Year. All three of them are going to hate this column, but this needs to be written.

I stand in awe of what these three individuals have accomplished and continue to accomplish on behalf of making the Wenatchee Valley and North Central Washington. Rolfs was one of the architects of the “Connecting the Dots” TEDx Conference that encouraged collaboration and cooperation. That was the trigger point for a civic awakening about the power of engaging the community that ultimately led to the grass roots-driven Our Valley, Our Future community building effort.

An organizational genius with a knack for bringing people together, she has been instrumental in the Wildfires and Us effort to encourage community action to address our growing wildfire threat. A long-time volunteer in the Wenatchee School District, she has become a master of seeing an opportunity for a creative solution, bringing together a group of like-minded people to work on it, and making it happen.

For example, she was been instrumental in developing the maker space for kids at the Wenatchee Valley Museum and Cultural Center. Another unique project that has Rolf’s fingerprints all over it is the Wenatchee School District’s Kinder Art program, which brings local artists into Kindergarten classes to work with youngsters to explore making art. This started as a single pilot project at Washington School and is now in every school in the district.

Partnering with community artists connected them to the students in meaningful ways as providing the schools with a low-cost way to inspire kids’ creativity at a crucial stage of their development.

Rolfs is a constructive, engaging, visionary soul who has an innate knack for figuring out how to get things done in a cooperative, collaborative way. She’s truly a treasure.

Jim and Karen Russell have very much the same resume. Those two have been instrumental in the resurgence of our treasured Wenatchee Valley Museum and Cultural Center, which was barely hanging on just a few years ago. Karen Russell was the board chair and Jim Russell came on as interim executive director.

Those two are quiet, hardworking and dedicated community leaders. Together, the Russells discovered that there was previously unknown financial strength at the museum. That led to a renewed confidence, the hiring of an exceptional leader in Sandy Cohen and a bold new vision for that organization. They took a perceived disaster and found a way to re-energize and re-imagine the future. Then they provided key financial support to get schematics drawn up of the reimagined museum, with interactive displays that will one day connect our community to the past and the future. Jim Russell has also been a strong leader in the Wenatchee Rotary Club, which has made some enormous contributions to our valley.

At the event, Jim Russell talked about being married to Karen for 53 years and spoke glowingly of his wife’s influence. He joked that he “married up,” according to Laurel Turner, executive director of the Women’s Resource Center. Rolfs, true to form, looked out at the crowd and talked about the power of the people in the room and what is possible when individuals work together for a good cause, Turner added. The event honoring Rolfs and the Russells was sold out.

You can help the Women’s Resource Center in its mission by supporting the GiveNCW campaign. The Community Foundation of North Central Washington has funded $12,500 of the organization’s needed $25,000 goal. Community members have stepped forward so far with another $2,000, so another $10,000 or so is needed. Let’s make that happen. 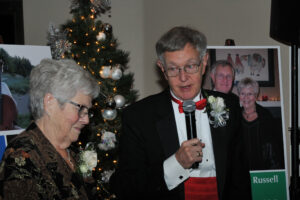 Philanthropists of the year Jim and Karen Russell 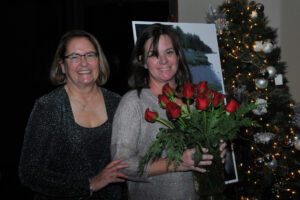