Retiring Chelan County Commissioner Ron Walter is wrapping up his work and taking some well-deserved bows for his contributions to fostering collaboration in dealing with challenging issues. On Thursday, the Upper Columbia Salmon Recovery board bestowed on him the Esther Stefaniw Memorial Award for his contributions to restoring salmon, steelhead and other at-risk species “through collaborative, economically-sensitive efforts.”

He has instrumental in the work of the Upper Columbia Salmon Recovery Board, a nonprofit that is doing important in funding restoration projects that will enhance fish survival. He also was part of the founding of the North Central Forest Health Collaborative, a cooperative effort bringing together public agencies, conservation groups and industry to address forest health issues.

Ron stopped by my office this week to chat about his career, his work on collaborative natural resource efforts, and retirement. He told me that he was “a little emotional” thinking about Stefaniw because she was such a leader in the county and the state in addressing salmon recovery and watershed issues.

In the mid 1990s, Chelan County had a reputation for being at odds with the state over growth management issues. That changed when Stefaniw, the late Jim Lynch and John Hunter were elected county commissioners, Walter recalled. He was committed to continuing that work. Stefaniw passed away in 2001, just months after Walter was elected to the commission.

In a letter to Ron from Paul Ward, the Yakama Nation fisheries manager and chair of the Salmon Recovery Board, Walter was praised for his “thoughtfulness and integrity in working with other citizens and members from diverse perspectives” in working for collaborative solutions to salmon recovery and forest health. At the award ceremony, Ward recalled that before the UCSRB was launched, the Yakama nation was suing Chelan County over fish issues. He recalled thinking at the time that there had to be a better way. UCSRB was launched to build shared action to address critical fish issues.

When he was elected to the Chelan County Commission, Walter said he thought the county needed a more effective approach in dealing with federal and state agencies on issues such as natural resources. At the time, there had been battles in the Methow Valley with threats of agriculture losing its access to water. Walter believed that the best way forward was finding common ground rather than fighting those agencies — becoming part of the solution, as he put it. The potential impact on agriculture in Chelan County of fighting federal and state agencies would have been devastating, Walter said. He said he didn’t want salmon to be for the agricultural industry what spotted owl was to the timber industry.

Ron credits his experience with the Washington Ag Forestry and Education Foundation’s leadership program with helping him develop his collaborative philosophy. That two-year program gives individuals broad experience in understanding economic, social, natural resource and political issues from various perspectives. “Building the coalitions of the broad interest groups is what makes it all work,” Ron said.

In the last five or six years, forest health has become a huge issue for Chelan County and North Central Washington. The growing threat of wildfires and the economic and environmental destruction that goes along with the high-intensity blazes has underscored the forest health challenge here. Forest health is deeply interconnected with salmon recovery and it became clear to Walter that all of the good work being done on salmon recovery could be decimated unless the forest health was improved.

This is the sort of systems thinking that is desperately needed in our solutions today and which is the basis for the work of the Forest Health Collaborative and the Upper Columbia Salmon Recovery Board. We cannot hope to isolate individual issues, ignore the interdependence of the natural world, and thrive. We need these collaborative approaches to connect the dots and seek long-term solutions.

Walter is turning the reins over to Kevin Overbay, who was elected in November and will take office in January. Walter said the county will be in good hands with Overbay and fellow commissioners Doug England and Keith Goehner.

Meanwhile, Ron plans on spending a lot more time with his nine grandchildren and skiing with his wife Deb at Mission Ridge, where they met years ago. 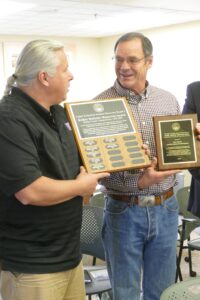 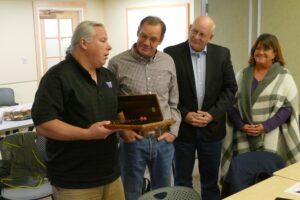