More Than A Park, Part 1 | Rediscovering South Wenatchee: A diamond in the rough

I predict that in five years, people will be viewing South Wenatchee and the redeveloped Kiwanis Methow Park in a similar way. South Wenatchee has a lot going for it in terms of a strong sense of community, but needs some investment. The Trust for Public Land is coordinating an effort to redevelop the park that involves numerous partners in the city and is being driven by the desires of neighbors.

This is the first in a series of columns I will be writing about the people and organizations who have been working toward this transformation and the lessons we can learn about creating a stronger, more resilient community that values and fosters a sense of ownership and belonging.

The series, More Than A Park, will highlight engaged and involved people from South Wenatchee, efforts by the city of Wenatchee to build relationships and reinvest in that part of town, as well as the story of The Trust for Public Land’s efforts to help the neighborhood and the community reimagine the park and create a place that fosters mental, physical and social well being. I’ll also explore the way businesses and civic leaders are investing their time and treasure to support this neighborhood redevelopment project.

One thing to note at the outset is that what is happening in South Wenatchee demolishes the theory that people won’t get involved in civic affairs. It is evident that if agencies are thoughtful and creative about public engagement and create a framework in which people can make meaningful contributions, engagement will happen. We see this very clearly in the developments of South Wenatchee. An interesting lesson that I am learning is that a park can and should be far more than a place for exercise and open space for people to gather. Parks that are well-designed with the neighborhood in mind play a crucial community role in physical, social and mental health.

The Trust for Public Land has made redeveloping Kiwanis Methow Park a top national priority. With the help of local leaders, more than $2.3 million has been raised locally and through state and national grants to fund the park. Another $1 million is left to raise.

How this has happened is important. It has been done in collaboration with the neighbors who live there — a neighborhood-driven process. Key local people like retired educator and artist Terry Valdez, pastor Misael Fajardo-Perez and Wenatchee Valley College student Teresa Bendito have played important roles in the outreach efforts. Neighbors have responded with their ideas and enthusiasm. People have come together to dream and plan over plates of great food and with music playing. This has proven to be a powerful way to engage the neighborhood.

The creative community engagement started with the visit by a team from the American Institute of Architects several years ago that focused on how art and architecture can be catalysts for community building. That got the ball rolling.

Subsequently, former Wenatchee Community Development Director Steve King began his own outreach efforts to the community, which started building trust and confidence in the neighborhood. The neighbors saw that talk was leading to action. The city’s engagement has continued. The city invested in a neighborhood-driven safety corridor project with artwork that was inspired by the neighbors, streetlights and sidewalks that are more than just infrastructure. Manuel Valencia of the United Neighbors Association was a key advocate for the community in that effort.

Working in cooperation with the neighbors in South Wenatchee, good things are happening. We are tapping into the wisdom and vision of more people in the community and that will benefit us greatly as we create one community out of what was in some respects two communities.

I am excited to share some stories and hope that by doing so, you will be able to get acquainted with the incredible people who are doing their best to make the community a better place to live for all of us. 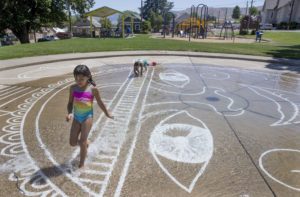 Kids play in the wading pool at Kiwanis Methow Park on July 19. 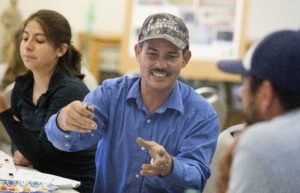 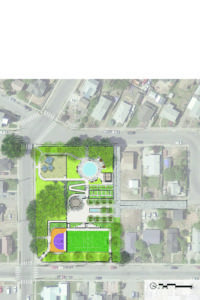