There will be a very powerful discussion on Wednesday, June 13, 6:30 p.m. at Celebration Lutheran Church in East Wenatchee. Irene Morrow recently returned from Texas after spending a week volunteering with a legal organization called CARA Pro Bono to provide legal help for women who are fleeing violence and gangs and seeking asylum in this country.

She stopped by my office with Jessie Rehms, a staff attorney with the Northwest Immigrant Rights Project to talk about the trip. Morrow is no stranger to the humanitarian impacts of conflict in other countries. She and her pastor husband David Morrow of the Wenatchee Brethren Baptist Church spent four years in El Salvador in the late 1980s during that country’s civil war.

Morrow, a nurse practitioner by training who is fluent in Spanish, participated in a team supervised by an attorney that met with women every day to hear their heart-wrenching stories and assist them in making their case for asylum. Under our immigration laws, to receive asylum individuals’ circumstances must fit into specific guidelines. The detention centers — like Dillie, Texas where she volunteered — are desolate places and the volunteers are the only legal help available. There is no guarantee of any legal help to navigate through the process except for these volunteer efforts.

“My thought going there was that this is a humanitarian crisis,” Morrow told me. The stories she heard were terrifying, such as the woman who refused to pay extortion to a local gang and whose child was murdered and his head left on the mother’s doorstep. She also listened to stories of women being raped in front of their children. Gang violence in some of these countries is just like a war zone, Morrow said.

Adding to the crisis, she said, was the policy that exists that separates these mothers from their children as an attempt to deter people from entering this country. The traumatizing effect of that on the children and mothers is profound, Morrow said. Instead, she added, “we should be showing compassion for those fleeing gang violence.”

Another poignant aspect to this situation is that so many of these women are religious. They are fleeing violence and praying for God’s assistance. Yet the fact is that those entering our country are considered to be criminals. She referenced Mathew 25, in which Jesus said that “what you do to the least of these, you do to me.” She has a hard time squaring that statement of compassion with what the government has chosen to do.

She will share her stories at Celebration Lutheran Church, 801 Eighth Street N.E., in a talk titled: “Fleeing for their lives: Women and children at the border.” Situations like this challenge us to confront the circumstances of the human beings involved and invite us to consider our own ethical and moral convictions. 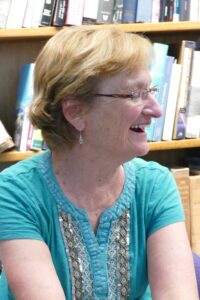