Keisha and Adrián, Pt 1: Love blossoms between an undocumented immigrant and a literacy tutor

I have been on a quest to more fully understand our immigrant community and gain greater insight into the complexities and human impacts that are the result of having a significant number of undocumented workers as our neighbors.


The question of how to wrap one’s mind around the issue of undocumented individuals in North Central Washington may seem simple, but when you look below the surface, there are layers of complexity and no easy answers.
Undocumented immigrants are not in the country legally, but without them our fruit industry wouldn’t exist. How can we accept the contributions of their work and call them criminals for doing work that would otherwise be left undone? Latino immigrants also bring a strong sense of community, family and faith to our valley and contribute culturally and artistically to the vibrancy of North Central Washington.
I got a taste of how complex this issue can be when I interviewed Adrián and Keisha Castañeda, a married couple with three young children. I met with them several times at their Missio Dei Church, accompanied by their pastor, Thom Nees.
Keisha is a blond, blue-eyed citizen from a staunchly Republican family who, until four years ago, had moral qualms about getting romantically involved with an undocumented immigrant. She summed up her initial reaction to dating Adrián as “not on your life.” Eventually, she came to appreciate his reasons for coming to this country and found him to be a man of high principles and character. Ultimately they fell in love, got married and started a family.
Their story has many layers. It’s the story of two people who fell in love, then married and had three children. It’s a story of living with the knowledge that he may or may not be allowed to stay in this country and that they might all have to pack up and move to Mexico.
Another part of the story is about family of five having to survive on $27,000 a year because he cannot put his engineering experience to work and has to live in the shadows of society by working in the orchards like so many undocumented individuals.
Their story invites us to ask ourselves what would we do if we were thrust into their circumstances and test our assumptions about what is right and wrong. Do we view them as people who are taking advantage of the system or individuals caught between two worlds?
Countless immigrant families have individuals with varying legal status and a significant tightening of policies would exact a terrible economic and human price from them.
Keisha and Adrián have begun the legal process of seeking a waiver that would allow him to stay in this country legally because of economic hardship issues. The chances are uncertain. But I think it’s relevant that they are not asking for our sympathy but instead hope that by coming forward and telling their story, people might have a better understanding of the reality of what it means to be undocumented in this valley and this country.
I hope you enjoy the stories and add your own insights or pose questions as we follow their journey.

Coming up Next:   Part 2 A reluctant immigrant crosses the border for family, finds love 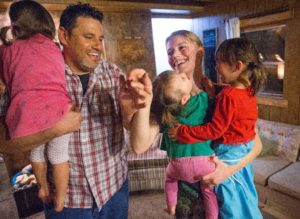 2/3/2017 World photo/Don Seabrook
Adrián Castañeda and his wife Keisha dance with their children in their East Wenatchee living room on Feb. 3. They met at a weekly swing dance in Wenatchee. Their children are from left, Grace, 3, Gardenia, 1, and Debbie, 3. 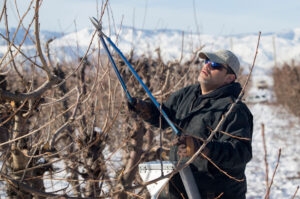 2/2/2017 World photo/Don Seabrook
Adrián Castañeda works in an orchard pruning cherry trees on Feb. 2. He is an undocumented immigrant from Mexico. He and his wife have begun the legal process of seeking a waiver that would allow him to stay in this country legally because of economic hardship issues.