It is rather remarkable how big an impact retired school employees are making in this region.

I met recently with the board of directors for the Chelan Douglas School Retirees Association to learn more about their organization and what kinds of projects they are getting involved with in the valley and came away impressed with the partnerships they have developed and the amount of causes they are supporting.

They have a powerhouse group of women who serve as officers and executive board members, including President Bev Jagla, Vice President Marie Buckner, Secretary Shirley Schreiber and treasurers Christie DeKraii and Jan Ottosen.

Like so many other successful organizations in our area, they have found that they can accomplish much more in collaboration with other organizations than just doing their own thing in isolation.

Teachers and other school employees went into the profession because of a love for serving children and the community, they pointed out. “Once a teacher, school employee or principal, that (sense of service) never leaves you,” said Denise Perkins, who serves on the executive board. The organization has nothing to do with any unions and is nonpartisan. Not surprisingly, they spend a lot of time and energy lobbying lawmakers to maintain benefits for retirees.

Locally, the most significant effort they’re involved with is providing support for Rock Island Elementary with both member volunteers and community volunteers that they recruit. This has been a long-term commitment.
But they have their fingers in a lot of important projects, such as Every Kid at the PAC program put on by the Numerica Performing Arts Center. That program brings kids from all backgrounds to the theater to experience high-quality shows.

The school retirees are also involved with the Greater Wenatchee Area Technology Alliance to support the Apple STEM (Science, Technology, Engineering and Math) efforts, the Wenatchee Valley Museum and Cultural Center, Small Miracles (which provides food for low-income students), as well as a grant program for school employees who are still active in the classroom.

They do unique things with some of the grants. A few years ago, a bus driver in the Cascade School District applied for and received a grant to take students to the city pool and then out for hamburgers to thank them for being kind and polite.

They’ve purchased caps and gowns for WestSide High students, provided extra physical education clothes in Cashmere and provided gloves for kids in Orondo. Their programs touch every district in the two counties.
The School Retirees Association has also taken on homelessness issues with support for Grace House and Haven of Hope as well as homeless liaison programs in the school districts.

There are so many needs in our community involving kids that should be addressed but lack funding or volunteer support. It’s heartening to know that the retired school employees are pushing the envelope to create as much support as possible so that we give every kid the best chance possible to succeed. Every person in the valley has a personal stake in the success of our children. 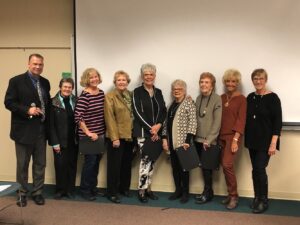