More Than a Park, Part 4 | For low-income residents, sense of belonging is hard to find 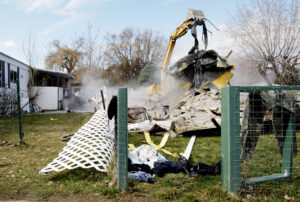 3/9/2004 World file photo/Don Seabrook
A large backhoe crushes a mobile home Tuesday, March 9, 2004, one of the homes being removed or destroyed at the Ninth Street Trailer Court in Wenatchee.

Teresa Zepeda and her family know what it’s like to live in what was once an out-of-the-way place that suddenly becomes desirable from a real estate investment perspective. They know the feeling of being in the way and unwanted in the community when it came time to relocate.

The reaction of community members when it comes to new low-income housing projects is anything but welcoming. It’s the NIMBY (not in my back yard) effect, says Patrick Pleas of the Northwest Justice Project, who works with low-income folks on housing issues. When low-income manufactured housing is lost, replacing it is exceedingly difficult because potential neighbors fear they might suffer financial losses in terms of the resale of their homes. That resistance makes it extremely difficult to replace what was low-income housing elsewhere in the community.

In 2006, the Zepeda family was living in the 9th Street Mobile Home Park near the riverfront in a manufactured home that cost them $300 per month, Zepeda remembers. At that time, the riverfront was just being developed and a development company, Kamkon, purchased the property. What ultimately was developed on the site was the Riverside 9 apartment complex, after Kamkon sold the property.

But when you are living at the margins, you find out quickly enough that what seemed to be a welcoming community isn’t all that welcoming. A proposal to create another mobile home park near the Appleyard fell through and residents of the Ninth Street Mobile Home Park were pretty much left on their own, despite some assistance from the Just Housing Coalition, Community Action and some state and local funding.

For Zepeda, the situation left a bad taste in her mouth. When I first interviewed about Zepeda about the Kiwanis Methow Park project that she’s been instrumental in supporting, she told me she always felt welcome in the community. But she reached out later to talk about the unwelcome feeling that she felt with the Ninth Street Mobile Home Park project.

She recalls the family having to pay three times as much for rent after losing their home at the mobile home park. The family struggled to make ends meet. Her daughter, Teresa Bendito, remembered how much fun it was to live on the property so close to the river. It was, she recalled, a wonderful place to grow up.

When the park was being closed down, residents were offered money from the state to relocate mobile homes, an amount that was matched by the city of Wenatchee. Many of the mobile homes could not be moved because park residents were unable to find available vacant spaces in area mobile home parks to move their homes. Some folks ended up homeless, Zepeda said, others moved to a mobile home park on Boodry Street outside the city limits. It was a traumatic time.

Pleas, when he first came to Wenatchee to take a job with the Northwest Justice Project, marvels at the sense of community that exists in South Wenatchee. His first apartment here was in South Wenatchee and he recalls his father laboring to carry boxes to his second floor apartment.

His Latino neighbors saw him and rushed to help out. That’s the kind of community spirit that exists in South Wenatchee, particularly in the Latino community.

Zepeda has not allowed her experience with the mobile home park to sour her on being part of the community. She’s a little slower to trust but she sees that the city, The Trust for Public Land officials, and community members are committed to creating Methow Park as a community asset. This gives her a greater sense of belonging.

The situation points out the need for policy changes in our cities and counties to create requirements and incentives to promote the development of affordable housing priced at a level that is affordable to low- and moderate-income households. That’s a change we’ll make if we want to make our communities places where people across the socioeconomic spectrum are welcome.

That is, after all, what Zepeda wants — to be a contributing member of the community. Isn’t that what we all want?