It was 100 years ago Wednesday, July 18, that my grandfather Rufus Woods published the first story proposing the construction of a massive dam on the Columbia River and diverting water into the Grand Coulee to irrigate up to a million acres of land. What an audacious dream for a small group of folks out in the middle of nowhere in Eastern Washington. The story’s headline took almost as much space as the page seven story: “Formulate brand new idea for irrigation Grant, Adams, Franklin counties, covering million acres or more.”

Rufus Woods, who bought the paper with his twin brother Ralph in 1907, was enthusiastic about the idea proposed by attorney Billy Clapp of Ephrata. Rufus loved big headlines and grand projects. “The last, the newest, the most ambitious idea in the way of reclamation and the development of water power ever formulated is now in process of development,” he wrote

“The idea contemplates turning the Columbia River back into its old bed in Grand Coulee, by the construction o a giant dam, the reclamation of between one and two million acres of land in Grant, Adams and Franklin Counties and the development of a water power approximating Niagara Falls…. Should it develop that the dam could be built at a reasonable cost, there will unfold one of the most interesting development projects ever conceived by man.”

It was the beginning of an extraordinary journey to build what was hailed as the “Eighth Wonder of the World.”

The idea was roundly ridiculed as a pipe dream but the small band of enthusiasts promoting the project was undaunted. The construction of Grand Coulee Dam and the Columbia Basin Project was transformational for this region and the country. The power created was desperately needed during World War II for aluminum production and for a certain secret project at Hanford. This progress came with significant environmental consequences, it would be fair to say.

To bring the project to fruition, they had to battle it out with powerful interests in Spokane that were pushing the agenda of the Washington Water Power Company.

For the next three decades, Rufus Woods championed the cause of the project. He never lived to see water delivered to the Columbia Basin, which is a good reminder that we ought to be working on important projects that we will never personally benefit from.

A new set of challenges confronts us today and while it’s appropriate to celebrate the past, we need to look down the road 100 years and commit ourselves to efforts that will improve the quality of life for those who follow in our footsteps. 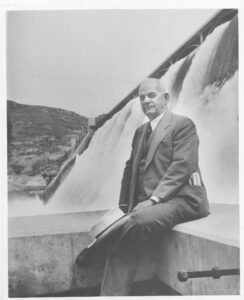