Nominate a social justice champion in our valley

One of the things I greatly appreciate about the Wenatchee Valley is the strong community commitment to inclusion —the notion that everyone belongs and deserves respect.


We see this in the way people support programs like the Special Olympics Winter Games, the outreach by the city of Wenatchee to create more bridges to South Wenatchee and our Latino neighbors, the wild popularity and national significance of Mariachi Huenachi in the Wenatchee School District, the various homelessness programs that are widely supported in our valley, to name just a few.
The arc of our valley and North Central Washington clearly favors inclusion.
That’s why I’m such a big fan of the Annual Civil Rights and Social Justice Awards sponsored by the City of Wenatchee’s Diversity Advisory Council. These awards are for people throughout the valley and not just in the city of Wenatchee.
The city is starting to take nominations for the 2018 honorees, who will be honored in January as part of Martin Luther King Day festivities.
Nominations for businesses, individuals, organizations and young people need to be completed by Wednesday, Nov. 29.
To make a nomination, fill out the form that can be found on the city web site. Under the “government” tab, you’ll find a link to the Diversity Advisory Council. All of the information is there.
An impressive array of individuals have been honored:
2005, Rocci Hildum; 2006, Sue Baker and Jorge Chacon ; 2007, Jim and Rosemary Tiffany and Charlene Woodward ; 2008 Ruth Esparza, Just Housing Coalition; 2009, Ignatio Chavez and Fiestas Mexicanas; 2010, Sgt. Cherie Smith, Cashmere Valley Bank and Domestic and Sexual Violence Crisis Center; 2011, Ernest Radillo, Wenatchee School District Mentor Program and Cherry Creek Radio; 2012, Mariachi Huenachi and Alejandra Gonzalez; 2013, Jesus and Melissa Hernandez, El Mundo and Columbia Elementary School; 2014, Aida Bound, Cashmere Valley Bank, WestSide High School; 2015, Lucy Montoya, La Nueva Radio, Wenatchee High School Interact Club; 2016, Joan Wright, Molina Healthcare and Junior Service League of Wenatchee; 2017, Norma Gallegos, Stemilt Growers and Northwest Justice Project.
Take a look at the names and organizations who have been honored and think about people or organizations that are making a difference in making our valley more inclusive, compassionate and just.
Here are a few ideas that come to my mind. Our Valley Our Future has done great work in rewiring this community to include everyone; the Numerica Performing Arts Center and its Every Kid at the PAC effort is also making a difference. Artist Terry Valdez, Pastor Misael Fajardo-Perez and the Trust for Public Land have done amazing work in building community in South Wenatchee, to name just a few.
Creating a strong sense of community, caring for each other, and demanding of ourselves that we stand up for social justice are noble pursuits that can inspire us to make our valley truly great. 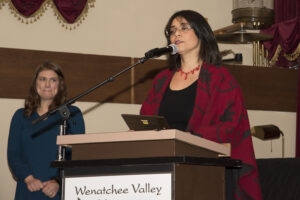