The recent motorcycle sidecar tour by Donni and Don Reddington to raise awareness about Alzheimer’s was a smashing success and built community across the state.

I spoke with Donni recently about the 10-day tour with rallies in several cities throughout the state. Don Reddington, a retired CPA who once lived in the Wenatchee Valley and now resides in the Methow, was diagnosed a few years ago with the condition.  He and his family have been quite open about the disease.

Donni, his daughter and a recovery room nurse at Confluence Health, conceived of the tour to raise awareness and to have another adventure with her father. It might be their final adventure together. They had plenty of challenges and adventures along the way. Her motorcycle broke down near Ross Lake on the first leg of the journey. Fortunately, Don Burleson of Cashmere lent them his motorcycle and sidecar and they made it to their rally in Bellingham nearly on time. Local individuals involved with Alzheimer’s patients put on the rallies and those events created an opportunity to bring the community of patients, family members and providers together.

Reddington said it was personally challenging to care for her father around the clock for nearly two weeks, something that her mother deals with on a daily basis. She had great help from Marigrace Becker of the University of Washington’s Memory and Brain Wellness Center, friend Delcie Proffitt and Reddington’s fiancé Corbin Massey. Dealing with an Alzheimer’s patient takes a great amount of patience as they have lucid moments intermixed with more clouded ones, she told me. Don was interviewed by television reporters a few times, and while Donni said she held her breath a bit, he did a wonderful job of telling his story.

At each rally, Reddington had arranged for people who were connected with her father to show up and interact with him. He recognized and interacted with them, which was a wonderful part of the trip. The trip concluded at Pybus Public Market on July 12 with a big party, supported by Pybus and Confluence Health. Reddington said she came away with a deeper sense of how many resources are out there for families to tap into when a loved one is diagnosed with the condition.

For more information about Alzheimer’s, check out the state chapter of the Alzheimer’s Association at: http://www.alz.org/alzwa. Another great resource is momentia.org, which is dedicated to keeping those with memory issues active and engaged in the community.

The ride4Alzheimer’s tour shows the power of creating community and connecting people. 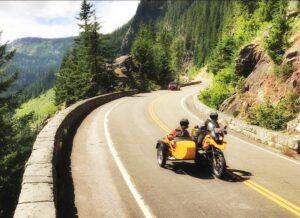 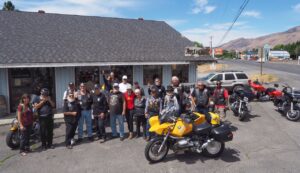 Supporters came out to ride with the Reddingtons 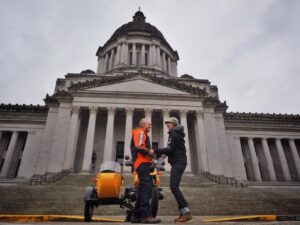 At the state capitol 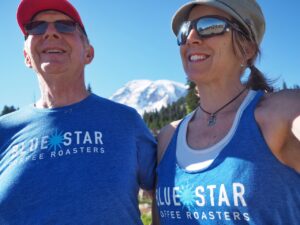 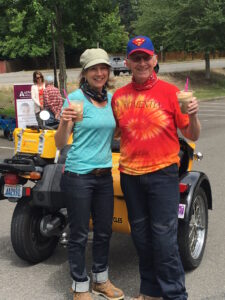