The Leavenworth Community Farmers Market is making some wonderful progress in helping foster a greater sense of community while building a healthier bottom line, thanks to the energy and creativity of executive director Jenny Bourgeois and the board of directors. Bourgeois is a young leader to watch in North Central Washington.

Last week, the market put on a fabulous fundraising dinner in the garden at the Tierra Learning Center in Chumstick Canyon. The garden is home to Tierra Garden Organics, and farmers Eron Drew and Willy Stockman gave us a tour of the four acres of vegetables and fruit they are growing for restaurants and farmers markets in the region. Drew is on the board of the farmers market.

The highlight of the event was an outdoor dinner near the garden with a selection of wine from Boudreaux Cellars that matched a five-course meal prepared by the chefs at Watershed Café, the Leavenworth restaurant that specializes in farm to table dining. Boudreaux General Manager Keely Newsom even entertained us with a soulful rendition of the song “Summertime.”

The day after the event, I had the opportunity to chat with Bourgeois. She’s a 2007 graduate of the University of Puget Sound with degrees in international studies and French. After graduating, the Utah native discovered her passion for sustainable farming and she pursued that career by working on farms in Colorado and California. Bourgeois and her husband moved to the valley more than a year ago so that he could pursue his dream of developing a boutique ski manufacturing business called Lithic Skis at Peshastin and she could pursue her passion of sustainable farming.

Last year, Bourgeois worked for Oh Yeah! Farms in the valley and began selling produce at the farmers market. When the position of managing the market came available earlier this spring, she jumped at the opportunity. She and her husband fell in love with the community almost immediately after arriving. “We’ve gotten a lot of community support. People have been inclusive and inviting and we’ve been able to blossom in that environment,” Bourgeois said.

Bourgeois has a winning personality. She’s outgoing, creative and a natural relationship builder and is passionate about the power of the farmers market to meaningfully connect with their friends and support local farmers doing sustainable agriculture. Sustainable farmers typically struggle financially in small communities.

The market is open on Thursday nights from 4-8 p.m. and local Leavenworth residents flock to the market to listen to music, buy fresh produce and perhaps have a bite of dinner at booths featuring local fare. Leavenworth is a tourist town first and foremost but the farmers market doesn’t appeal to the vast majority of those folks, she told me.

When Bourgeois took over the market, finances were tight and Bourgeois and the board focused on developing a stronger financial foundation. The fundraiser was one part of the financial strategy, and the market is also inviting community members to become “friends of the market” by making a financial contribution as well as attracting some local business sponsorships.
Watershed Café and Boudreaux Cellars are a couple of the strong business supporters. Watershed, which is owned by three chefs who are passionate about local food (Dan Fiske, Brian Baker and Joey Fiano), donates a percentage of proceeds one Thursday a month to the market, Bourgeois said. She also works as a server at the restaurant.

One of the great assets of the upper valley is the strong sense of community that already exists, particularly among members of the younger generation.

She’s also seeking to develop stronger partnerships in the valley, including building on the strong relationship with Upper Valley MEND, the nonprofit that provides critical services for those in poverty. Making sure that those who are financially challenged in the Upper Valley have access to quality, local food is an important goal, Bourgeois said.

Bourgeois grew up in Park City, Utah, a community of several thousand residents that has been overwhelmed by its own financial success. Many who work in service jobs have to commute to Park City from elsewhere in Utah. As someone who is interested in building a vibrant local community, Bourgeois told me she’s hopeful Leavenworth will find a way to support and enhance the sense of community and ensure that it retains the strong local culture.

I think she hit the nail on the head of one of our biggest issues. How do we build a strong economy and not sacrifice the community in the process? It’s a balance. 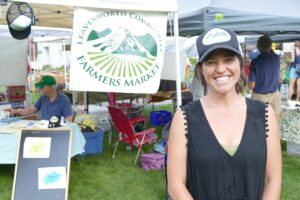 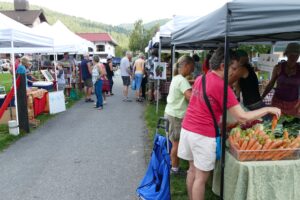 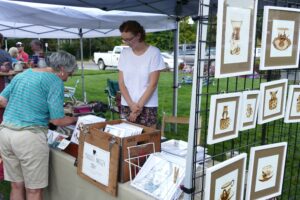 Artist Charlotte Massey peddles her art at the market 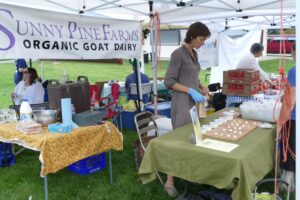 Sunny Pine Farms is one of the vendors at the market 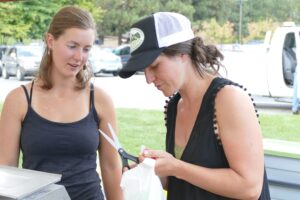