Give NCW’s crowdsourcing effort: We are all philanthropists

Giving back to the community is one of the defining characteristics of North Central Washington.

We continually demonstrate that the common good is equally as important as individual success and that working together we can address many of the challenges in our communities.

One of the organizations that has been instrumental in nourishing the sense of every day philanthropy is the Community Foundation of North Central Washington. The foundation just announced that its Give NCW campaign topped $200,000 in contributions for the second straight year, a remarkable success that has tapped into the giving spirit that exists in our communities.

The Give NCW crowdsourcing effort supercharged giving for 25 nonprofits the last two years. For years, the Community Foundation has given significant dollars through regional impact grants to well-run nonprofits doing important philanthropic work. But when the foundation added the crowdsourcing Give NCW component, in which individuals have an opportunity to contribute as little as $10 to help bridge the gap between what these nonprofits needed to raise and what the foundation was able to contribute.

This online giving campaign replaced what had been a modest community funding effort in partnership with The Wenatchee World. The $25,000, or $30,000 that was raised in those earlier campaigns was dwarfed when the foundation decided to help regional impact grant awardees raise even more dollars for critical needs in our region through Give NCW.

What has been accomplished thus far is only the beginning of what is possible by developing a culture of everyday philanthropy ini North Central Washington, which is a core objective of the Community Foundation. We are moving beyond the notion that philanthropy is something done by wealthy people. But as Executive Director Beth Stipe and her staff and board at the foundation know unleashing the power of small gifts is something that can help us further transform our communities by meeting needs that otherwise wouldn’t be met. We are all philanthropists.

Seven nonprofits were able to fully fund critical projects: Team Naturaleeza raised nearly $17,000 to create opportunities to connect more people with the natural world around us; Special Olympics raised more than $10,000 to help individuals with intellectual disabilities participate and achieve through athletics; Small Miracles raised nearly $35,000 to help feed hungry kids; Hand in Hand Immigration Services raised in excess of $32,000 to help immigrants to our valley earn citizenship; Chelan Valley Hope raised nearly $12,000 for its Tender Loving Care program for senior citizens; Cancer Care of North Central Washington received more than $8,000 for new washers and dryers at “Our House” and Camp Fire raised in excess of $15,000 to help kids experience the outdoors.

The $203,000 crowdsourced from the community combined with $214,000 contributed by the Community Foundation generated $417,214 in overall impact to nonprofits in our region.

There are so many ways the foundation is nurturing the sense of “us” in our communities. Through its “Give 10” program, it’s encouraging people to give 10 percent of their estate to charitable organizations. Anyone can give 10 percent, whether your estate is $10,000 or $10 million. You can direct the funds to a specific nonprofit or foundation in the region. For more information, check out the Give 10 program at cfncw.org.

The Community Foundation’s influence and impact has grown dramatically in the last 15 years or so since Stipe took over as Executive Director. The amount of funds being managed by the foundation has grown from about $15 million to more than $80 million. It’s expected to exceed $100 million by the end of 2019.

Between Stipe, the outstanding staff and the board of directors, our communities are greatly enhanced by the growing sense of philanthropy and the ownership we are taking for solving issues in our communities. 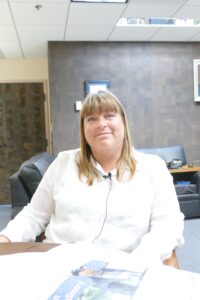