Music teacher Matt Brown of the Manson School District has built a highly effective and creative program by building a relationship with each student and helping them grow as musicians and human beings in a positive, supportive and challenging environment.


Brown is committed to the philosophy that every person in his class has growth potential and when that is the primary objective, their performance on standardized tests will reflect that growth over the course of the student’s development.
His approach and philosophy is something that can be useful for teachers but also for parents, business owners, nonprofit leaders and individuals who are seeking to foster long-term success.
I am partnering with Veronique Paquette, a second-grade teacher at Kenroy Elementary in East Wenatchee, to create a series of podcasts and columns highlighting outstanding teachers and their approaches to education. Our hope is these conversations will be of benefit to the citizens of North Central Washington. Veronique suggested Brown as our first interviewee after he was named the 2018-19 regional teacher of the year for North Central Washington.
It was interesting to discover that Brown, a Bothell native, did not grow up in a musical household. A self-described shy kid, his first introduction to music came from a friend who sat down at a piano and began playing, which inspired Brown to start playing the clarinet.
A teacher in middle school gave Brown the opportunity to direct the band one day and, after rehearsing one song, he asked the group to practice “Louie, Louie.” At the next concert, the teacher surprised Brown by calling him to the front to direct that song. For a baton, he used a comb from his back pocket. His journey to teaching music grew organically through a series of experiences in school and college. Brown met his future bride while playing in the marching band at the University of Washington and, after student teaching at Mercer Island High School, applied for and got the job teaching music in Manson.
Throughout his 14 years at Manson, Brown continually adjusts his expectations and introduces music that meets the needs and abilities of his students, to help them to perform their best. It is with this philosophy that a successful program has been built in a small district, such as Manson.
The program and students in that program are flourishing. From year to year, a third of the high school, and two thirds of the middle school are participating in music.
We asked him whether his success was rooted in specific programs that he had developed, but he said that the approach that he developed with the help of mentors was more important. Here are the some of the key parts of his philosophy and practice.
He commits to:
1) Assisting every student in finding success, which means different things for different students.
2) Developing creative ways to connect with individual students, learn about them and help them grow as musicians and in other things they are interested in.
3) Challenging himself to dream big and finding creative ways to collaborate on projects with other departments. Students these days need to connect the dots between disciplines so he started inviting other departments to participate in events.. One such project has been “The Collaborative Experience” where students from the music, art, and shop combine their talents and present them in an annual expo of learning, based on a theme. This amazing combination of learning is one of the highest attended events at Manson.
4) Creating a relentlessly positive educational experience by avoiding the word ‘failure.’ “There are absolutely no failures, only growth potential” he told me, and he would prefer that the word be eliminated from education. “When we focus on the positives, we are more likely to get positive results.”
One story in particular highlighted Brown’s positive, student-centered approach. A senior, who Brown described as a rough kid, approached him and wanted to play in the band. Instead of turning him away, Brown worked with this motivated kid and by the end of the year, the student was first chair in the trumpet section. That is a beautiful example of bringing a sense of possibility to the classroom.
Matt Brown is an exceptional teacher who walks the talk that education works best when teachers are committed to the growth and well being of their students and create a positive environment that encourages kids to take risks and grow from every experience. 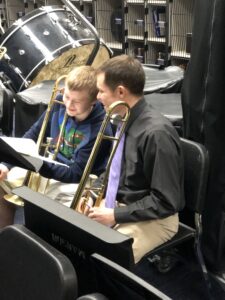 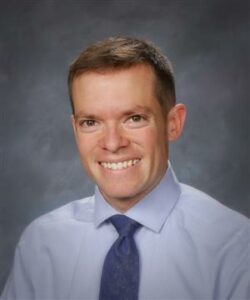