For more than 50 years, Aurora taught puppetry at UW, created a puppet production company, performed in Operas, directed musicals ranging from Grand Opera to Musical Comedy and much more. Puppet shows that she wrote, directed and performed in include Little Red Riding Hood, Beauty and the Beast, Rumpelstiltskin, Pinocchio, Punch and Judy, The Snow Queen and Jack and the Beanstalk In the Pacific Northwest, Aurora was known to thousands as “the Puppet Lady” or “Miss Vee.” She was the star Puppet Theatre Playhouse and Workshop on KCTS. Through that show and the numerous workshops for service and volunteer organizations, as well as classes at the University of Washington and in Seattle public schools Aurora introduced the art of puppetry.

In 1948 Aurora formed Valentinetti Puppeteers to provide an outlet for the talents and enthusiasm of the graduate students who had performed with the UW Puppeteers. From 1957 to 1959 they took on one of their biggest undertakings, the Christmas window show at Frederick & Nelson department store.

Aurora and I met at her apartment at Avamere Independent Living in Wenatchee, along with her niece Joanne Bratton of East Wenatchee. Aurora was surrounded by her favorite puppets, many of which she carved and painted by hand as well as sewed the clothing. She is sharp as a tack with wonderful memories her life and the students she taught. She doesn’t mince words. Aurora told me she has no idea how many puppets she owns but there are crates of puppets at the home she still owns in Seattle as well as at the Aurora Valentinetti Puppet Museum in Bremerton.

Every puppet has his or her own personality, she explained, and she talks to them. Some are cantankerous and difficult. Her first puppet, named Melody, was altered to become a ballerina for a performance in Pinocchio. Aurora cut off the feet and gave her new ballerina slippers allowing her to spin on her toes. One favorite puppet named Joy performed only once, after which time, Melody decided she didn’t like performing, Aurora told me, and the puppet never again appeared in a show. For as long as Joanne can remember, Melody has sat in a special chair in a protected case in Aurora’s bedroom and to this day remains a favorite of Aurora’s.

Teaching puppetry was the means to connect with students and build relationships with them. She became known for giving bluntly honest advice, such as when she told Harvey Blanks, one of her many Husky football students in the late 1960s, that he had no chance of playing professional football but that he did have the skills to become an actor. As it turns out, Blanks went on to an acting career that took him to Broadway.

Blanks recently wrote a note to Aurora that expressed his gratitude. “You saw something in me and never altered in conveying to me that if ever I got serious then I could succeed in this business. Well here I am,” he wrote.

Aurora never married, but she considers the countless students she taught over five decades to be her children. “It wasn’t for lack of proposals or propositions,” she told me. “I never met a man that I wanted to give up 98 percent of my private life to make him a success,” she added.

She misses Seattle but does get to spend weekends with Bratton and her husband Rex. The albums that Joanne has put together of news clippings, photographs, and other memorabilia has created a wonderful legacy of a lifetime of Aurora’s work and impact.

She built community one puppeteer at a time. 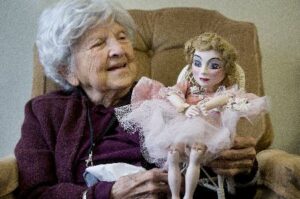 Famed puppeteer Aurora Valentinetti who taught children’s theatre and puppetry at the University of Washington, Aurora Valentinetti now lives in Wenatchee. She holds the first puppet she made that she calls Melody. Aurora says her puppets have different personalities. 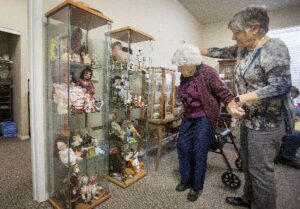 Joanne Bratton, right, helps her aunt, Aurora Valentinetti to a display case at her Wenatchee apartment showcasing what she says are her most important puppets. 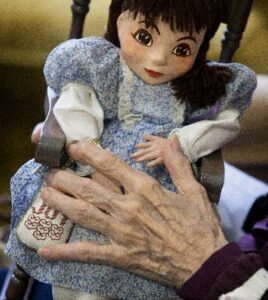 Aurora Valentinetti holds onto her puppet named Joy. She says Joy was used in only one performance of Pinocchio before Aurora says she made an agreement with Joy not to be used in any other puppet play.