If I could give out a courage award for selfless service and devotion, I would without hesitation give it to the late Don Reddington and his family. Don passed away Tuesday after a long struggle with Alzheimer’s. When he was first diagnosed with the disease, he and his family made a conscious choice to make his journey a source of education and understanding.

Together with a staff writer at the Methow Valley News, Don wrote a series of articles discussing what it was like to live with Alzheimer’s. Those stories were reprinted in The Wenatchee World. Here’s what Don wrote about the series:

His wife Ginger, a celebrated artist in Twisp who frequently has shows throughout North Central Washington, walked the journey with Don to the end. So did their three daughters, particularly Donni Reddington, a nurse at Confluence Health. Last year, Don and Donni decided to tour the state on a motorcycle and sidecar to raise awareness and provide hope for families dealing with the disease. It was a remarkable journey for the father and daughter.

I had the privilege to visit with Don and Ginger from time to time. I saw how exhausting it was for Ginger to provide care day in and day out. She remained resolute and showed an incredible amount of determination, grace and grit. And to bear this struggle in public was such a wonderful gift to all of us. It reminds us of the fragility of life and what really matters. Two of the things that really matter are family and community.

Don: your gentle spirit and wit will be missed. Ginger, Donni and the rest of the family: Thank you for taking us along on this most difficult of journeys and showing us what courage, devotion and selfless service are all about.

Your family has cleared the path for others to bear similar struggles with openness and grace. 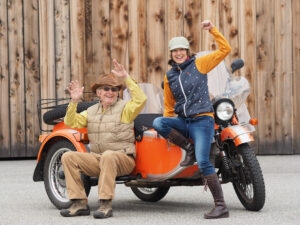 Don and Donni Reddington with Olga, the sidecar and the Ural motorcycle 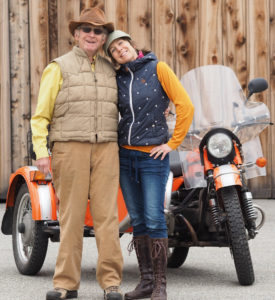