Quietly and without much fanfare, the city of Wenatchee has in recent years found effective ways to engage members of the community in city projects. That approach is building greater trust and empowering individuals to get more involved in civic affairs, particularly in South Wenatchee.

The city made some good inroads in South Wenatchee in the late 1990s when Dave Stalheim headed the planning department. Some good outreach work was done that included Jesus Hernandez, the former Wenatchee School Board member, and his father. Neighbors told the city that more investment needed to be done.

After Stalheim left, those efforts fell by the wayside and the neighborhood concerns in South Wenatchee were left unaddressed. Neighbors felt left out and frustrated and the trust in city government ebbed to a low level.

In the last several years, the city’s engagement with South Wenatchee has reemerged as a priority, starting with a visit by a team from the American Institute of Architects. The architects insisted upon a process that engaged the community. Wenatchee artist and former educator Terry Valdez, along with pastor Misael Fajardo-Perez, were deeply involved in what became the Imagine/Imagenese South Wenatchee project that invited citizens there to dream about what the neighborhood could become. That started a civic engagement process that has begun to transform the neighborhood, inspired residents of South Wenatchee to get involved in civic affairs, and resulted in significant investments by the city of Wenatchee to help residents achieve the goals of creating a thriving neighborhood.

The concerns about whether the city would follow through has lingered among community members who have gotten involved in recent years, including Teresa Zepeda.

The lack of trust was apparent to Brooklyn Holton when she first joined the planning staff at the city of Wenatchee four years ago. “It was almost like stepping into a different world,” said Holton. She encountered negative attitudes toward South Wenatchee that had been building for years and the residents of those neighborhoods had heard lots of promises from the city, but seen little action in terms of solving neighborhood challenges. There was a significant deficit of trust.

There has been a remarkable turnaround in the level of trust and in the sense of involvement and engagement of the citizens of South Wenatchee since that time, thanks to outreach by the city and the involvement of The Trust for Public Land in spearheading the redevelopment of Kiwanis Methow Park. There is a growing sense of civic pride and belonging in the neighborhoods of South Wenatchee.

Today, South Wenatchee is emerging as a neighborhood where citizens are getting involved in making it and the city a better place to live. The Trust for Public Land is spearheading an effort to redevelop Kiwanis Methow Park based on the desires of people who live in the neighborhood. This has destroyed the myth that people won’t get involved in civic affairs. When the city takes the time to make it safe and accessible to get involved, we are seeing that people will choose to do so.

One of the important milestones in this journey started with Steve King, then the city’s director of Community Development, who made it a point to start walking around the neighborhood and talking to neighbors asking about their needs.

The first significant investment in the neighborhood came in the form of a safety corridor project on South Chelan Avenue that included sidewalks with art drawn from design workshops featuring neighbors of all ages and streetlights with distinctive metal banners that resemble the papel picado, a decorative craft connected to Mexican culture.

Meanwhile, the city’s newfound interest in South Wenatchee inspired individuals in the neighborhood to get organized. The United Neighbors Association formed to advocate for the South Wenatchee residents, with Manuel Valencia taking on the role of spokesman and president. As city officials took initiative to find ways to involve and engage the residents of South Wenatchee, the citizens there rose to the challenge and began taking greater ownership of their neighborhood.

Holton stepped into the middle of this dynamic and has committed herself to having the city be a facilitator of the community. This reflected an important change in how the city operated. In the past, solutions would have come from city officials and presented to the community.

Holton believes that rather than the city deciding for people how their community should function, the role of the city is more appropriately to help neighborhoods create the kind of environment they want. I find Holton’s perspective refreshing because it encourages us to step up and help create the future we want, rather than having city officials make decisions in isolation. This is the essence of empowerment and the city of Wenatchee is proving that it works.

Holton sees this empowerment mindset playing out beautifully in the development of Kiwanis Methow Park. “The community is empowered to display their traditions and cultures,” she said, which is something that the city could not have mandated.

The Trust for Public Land has built upon the city’s approach with citizen involvement and engagement in its approach to the redevelopment of Kiwanis Methow Park. More than $2.3 million has been raised both through grants, funds from the city and private investment.

Members of the neighborhood have been deeply involved in redeveloping the park into an asset that will be a hub of activity and belonging. A group of about 20 neighbors are volunteering their time as “parque padrinos,” or godparents of the park, to solidify the sense of ongoing involvement. This is the power of community.

What makes this park project so meaningful is how it is bringing people together in our community to create something that enlivens civic life here. 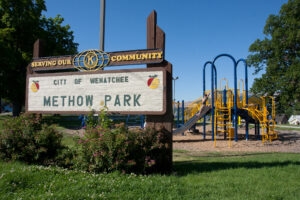