More Than a Park, Part 3 | Civic volunteer Teresa Zepeda has a vision for Methow Park 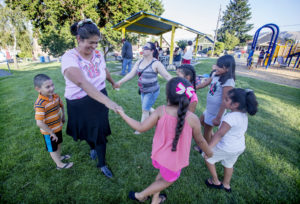 07252018 World photo/Mike Bonnicksen
After working on some math problems in a picnic shelter at Kiwanis Methow Park, Teresa Zepeda, second from left, plays the “Doña Blanca” game with kids and parents. 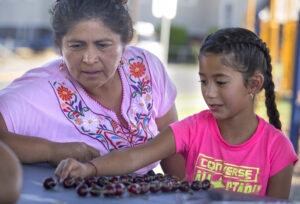 07252018 World photo/Mike Bonnicksen
Teresa Zepeda watches as Enedina Elias, 7, counts cherries to help with her math skills on Wednesday evening July 25 at Kiwanis Methow Park. Zepeda is involved with Parque Padrinos, godparents of the park, a group of volunteers that puts on nightly events in the park for the neighborhood children, helping them with reading and math. 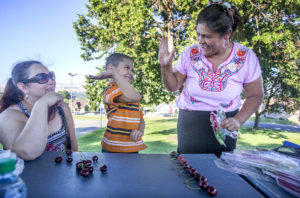 07252018 World photo/Mike Bonnicksen
Teresa Zepeda, at right, gives a high-five to Andre Chacon, 5, after he counted out a dozen cherries. Zepeda and his mom Azucena Nieto, at left, were helping him with math at Kiwanis Methow Park on Wednesday evening July 25. Zepeda is involved with Parque Padrinos, godparents of the park, a group of volunteers that puts on nightly events in the park for the neighborhood children, helping them with reading and math.

When Teresa Zepeda thinks about the redevelopment work that is about to begin at Kiwanis Methow Park and the support the project is garnering from many parts of the community, she is excited for the future and for the opportunity to develop it to celebrate the Latino culture and also become a destination that draws visitors from the entire community and elsewhere.

After decades of neglect, the city of Wenatchee in recent years has started making a concerted effort to reach out to the South Wenatchee neighborhood and engage the citizens in identifying ways to improve the neighborhood. A safety corridor project has been completed with art-inspired sidewalks on South Chelan Avenue and streetlights with metal banners featuring art created with the designs of neighbors.

The neighbors are responding to these improvements and engagement by stepping up to play a more active role in their neighborhood and city affairs, a clear demonstration that if you want people to be involved, it can be done if you create a welcoming atmosphere and build trust by following through on commitments.

Zepeda came to South Wenatchee from Mexico 23 years ago to work in the fruit industry. Friends had told her that Wenatchee was a paradise for apples with fruit growing abundantly. Her email address has paradise in it for that reason.

She told me that she loves Wenatchee and that she has always felt welcome in the valley. She’s grateful to St. Joseph’s Catholic School and the Wenatchee School District for the education her children received . A son graduated and went to Wenatchee Valley College, graduated from Eastern Washington University and has returned to the valley. Her daughter, Teresa Bendito, studies business at WVC and daughter Lupita will soon enroll at the school. Zepeda and her husband are currently students there as well, so the family jokingly refers to WVC as their personal community college.

Contributing to the community and learning how to be effective citizens has been a big part of Zepeda’s life in the valley. She has long been involved with CAFÉ (Community for the Advancement of Family Education), a civic engagement and education advocacy program started by Jorge and Alma Chacon.

The greater the sense of community and cultural belonging, such as exists at CAFÉ, she said, the more it inspires newcomers to contribute to civic life.

For years in South Wenatchee, there was a sense of isolation from the city as a whole, but that is changing. Now, with the redevelopment of Kiwanis Methow Park, thanks to the leadership of The Trust for Public Land and local civic leaders and businesses supporting the effort, Zepeda sees the sense of ownership in the community and neighborhood growing.

For the Latino community, “it’s very important to build trust,” Zepeda said. “You build relationships first and with it comes trust.” As the city has stepped up and engaged the neighborhood, she and others have responded by getting more involved.

The people in the neighborhood haven’t felt understood or wanted in this community, but that seems to be changing.

Zepeda and daughter Teresa Bendito are both involved as Parque Padrinos, godparents of the park. That group of volunteers is helping make it a place of community with time set aside for reading to children and helping them to learn math concepts.

She gives high praise to former Wenatchee Community Development Director Steve King for opening up dialogue and creating that sense of welcome and engagement. That appreciation for King is shared widely in South Wenatchee by those involved in the park.

The redesigned park, which came out of deep conversations with neighbors, features what will become the social hub of South Wenatchee — a “kiosko” that will be a central pavilion for cultural events, gatherings, music and celebrations.

“For me it’s very important as a Latino to have a place where we can go and have our own things that we do — decorate with papel picado (perforated paper designs) and piñatas,” she said. Gathering to make these things or tamales is a time of connection and community where stories are shared and friendships blossom. When she goes to a public event and sees her work hanging as decoration, “I feel so proud,” Zepeda told me.

Demographically, South Wenatchee is young, densely populated and about 60 percent Latino, so it is a very diverse neighborhood. The houses tend to be small and there are few gathering places for people to socialize and stay connected.

She told me its important for their children to not only learn the ways of the culture here but to stay connected to their roots, too. Fostering a sense of pride and ownership in their neighborhood may one day lead them to start businesses here and further contribute to the valley.

Zepeda, who owns a house cleaning business, has served for three years on the board of Columbia Valley Community Health to help keep the institution connected to the community it serves. She’s been learning a lot, she said, and sees what CVCH is doing to improve the health of the community, especially those in need.

She told me she’s excited about the possibility of the park improving the mental, social and physical health of South Wenatchee residents. With the park and the “kiosko,” as well as sport field and playground, it will be the first real public gathering place in the neighborhood that is welcoming and feels like home. Neighbors don’t feel the same way about the community center across the street because of the fees that must be paid to access the space.

She believes that in the near future, Kiwanis Methow Park will be an icon in the valley that will draw visitors and community members from around the valley.

Her vision is a community that celebrates all cultures and creates opportunities for the community at large to experience them. Now that’s a vision I fully support.