Walk into the event center space at our community’s Pybus Public Market these days and you’ll be blown away by how the space is being transformed. Holes for windows and glass doors have been cut out of the concrete block wall, exposing a beautiful view of the river and a welcoming access to the outside patio. At the south of the event center space, they are framing in a wonderful conference space that will create new opportunities for community groups to use the facility.

On Wednesday night, more than 120 people participated in a fundraising event called “A Taste of Pybus” and nearly $60,000 was contributed — bringing the total of funds raised to in excess of $300,000. A total community contribution of $500,000 is the goal, with a deadline of Dec. 31. One the inspiring things was that all of the merchants donated food, wine, beer and other items to support the effort, demonstrating that it’s not just a community market, it’s a market community. Local Young Life students helped serve the food.

Beth Stipe, the executive director of the Community Foundation of North Central Washington, reminded the crowd that what makes Pybus unique is that it is a place designed for our community rather than just as a tourist destination. You can’t say that about better-known facilities like Pike Place Market in Seattle. They’ve got trinkets and we’ve got community.

Pybus is a place to learn salsa dancing, engage with local growers at the Farmers Market, hear wonderful local musicians and see the work of local artists, Stipe said. Earlier this month, Pybus was the place where the Junior Service League gave away free prom dresses that were donated from community members. You can sense the heartbeat of the community in the place. My late father Wilfred once said that Pybus was the community’s “town hall.” It is all of that and it is becoming even more valuable thanks the sense of ownership that citizens in this town feel about this civic asset.

Singer, songwriter and author Dar Williams, in her book titled “What I Found in a Thousand Towns,” talks about the key ingredient for building social capital. She calls it “positive proximity,” or having places and events that bring people to dream, hope and contribute. That describes Pybus Public Market perfectly. A place of positive proximity.

It is inspiring and hopeful that citizens in our valley see Pybus Public Market as a community asset — something we all own and have a stake in. Witnessing the support for this nonprofit market reflects the commitment of our citizens to make our communities extraordinary for generations to come.

My grandfather Rufus was famous for his support for Grand Coulee Dam and the Columbia Basin Project. The words he spoke to the graduating class of Grand Coulee High School in 1942 could easily be used to describe the miracle that is Pybus Public Market: “So here it stands, a monument to the idea and the power of an idea; a monument to an organization; a monument to cooperation. You, class of 1942, could you come back here in a thousand years hence, you would hear the sojourners talking as they behold this ‘slab of concrete,’ and you would hear them say, ‘Here in 1942, indeed, there once lived a great people.’”

Let’s help the board of directors of Pybus fully fund this expansion. Check out pybusmarket.org for more details.

And don’t forget to market on your calendar the first week of October. Dar Williams will be hosting community gatherings and performing in local communities in North Central Washington. I’ll pass on more details later. 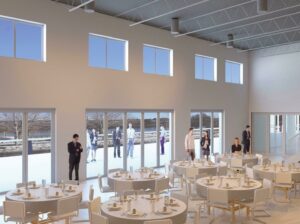 Artists rendering of the new event space at Pybus. 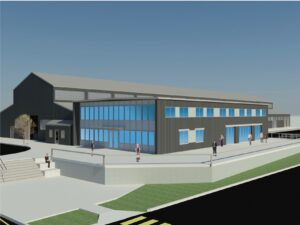