“When we look today at a culture and society that has become increasingly polarized… we have really got to look at how deeply and profoundly we are connected together and how we need to work towards a sense of respect and reverence for every person in that connectedness.” — Bishop Emeritus William Skylstad

Bishop emeritus William Skylstad spoke those words in a podcast interview I conducted recently as I sought to understand his background and perspective in advance of his upcoming public talk titled “The Moral Dimensions of Climate Change: A call to prudence, the common good and environmental justice.” You can listen to our conversation by accessing artofcommunityncw.com and clicking on podcasts or you can subscribe via iTunes.

The talk, which begins at 7 p.m., Sunday April 23rd at Kuykendall Hall at St. Joseph Catholic Church, is being sponsored by Climate Conversations NCW, a group of citizens who are seeking to better understand the science as well as what might be done at the local level to begin addressing this issue.

Of course, there is a fair amount of political controversy surrounding climate change and the role of human activity. Skylstad is convinced that the preponderance of the evidence is that the climate is changing fast and humans are responsible. But even climate change skeptics ought to consider Skylstad’s message that human beings and our environment are deeply interconnected and that we need to approach our thorny issues from a values perspective. There is a universality to this notion.

Skylstad is no stranger to North Central Washington. He was born in 1934 in Omak and a few years later, his Norwegian-born father purchased an apple orchard on the Methow River between Methow and Carlton. His first years of schooling were spent in a one-room schoolhouse in Methow before that district consolidated with Pateros. Skylstad and his five siblings all had jobs on the orchard and learned the value of hard work and cooperation. Skylstad also developed a deep appreciation for the natural wonders of that valley — the salmon and other fish in the river, the high lakes, and the wildlife that the landscape supported. He described it as a “rich experience.”

From an early age, he felt called to faith and service. At age 14, his parents allowed him to leave the valley and attend school in Columbus, Ohio to prepare for his calling. “I can’t believe my parents let a 14 year old kid who had never been on a train, let alone traveling 2,500 miles, go across the country,” Skylstad marveled.

He was ordained in 1960 a priest and then in 1977 was ordained as a Bishop. Skylstad served for many years in the Archdiocese of Spokane.

Skylstad earned widespread acclaim for his leadership in the groundbreaking 2001 Pastoral Letter on the Columbia River, a powerful document that articulated the significant environmental consequences from development of the river and those impacts on human beings. The document, which was years in the making and included listening sessions throughout the vast Columbia River watershed, advocated a set of principles that they suggested be used to make decisions about the future of the resource.

That Pastoral Letter has emerged as a proposed framework for rethinking the dialogue that needs to happen when the Columbia River Treaty is renegotiated. “It’s ten times better to use an ethical lens moving into that dialogue and discussion than try to come up with solutions that may be very outdated and become archaic very quickly,” Skylstad told me.

The stakes in the treaty renegotiation are high and the competing values among the various interest groups are extreme. Using the ethical values, he said, is the right way to “work through that and make the best possible decisions in complex circumstances for the common good.” From a theological perspective, Skylstad sees the importance of being good stewards for God’s creation as a moral imperative.

Our society is based on a short-term transactional mindset. Whether we can rise to the challenge of thinking about the common good over the long term is a key question. That would requires deep listening, treating people with respect and appreciating the complexity of human and environmental systems. We also need to recognize and own the mistakes and resulting negative consequences of past actions. The impact of development on salmon runs and the dangerous contamination threat of the Hanford Nuclear Reservation are a few examples.

Skylstad believes we cannot afford to simplify the equation to the environment vs. jobs. We need a clean environment and jobs — both and rather than either/or. I deeply appreciate Bishop Skylstad’s community-centered, values-based approach to solving complex and perplexing challenges. 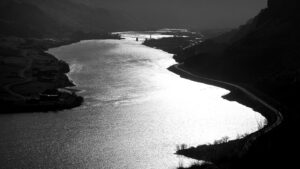 World photo/Don Seabrook
The sun glimmers across the Columbia River near Beebee Bridge on Wednesday.