Wilfred R. Woods: Working (whistling and laughing) through the decades in a great land

WENATCHEE — The tireless builder, selflessly dedicated to the welfare of his home region and the state of Washington, a skilled journalist and communicator, a lifelong lover and promoter of music, the arts, nature, history, geology, science and education. Wilfred Woods was all those things and more.

Wilfred was 47 years publisher of The Wenatchee World, a position suddenly thrust upon him with the unexpected death of his father in 1950. Wilfred sometimes said he saw his family business, a small regional daily newspaper, as a blessing, a stroke of good fortune, a tool that put him in the position of accomplishment. He proved through ceaseless effort that he was adept at both running a growing newspaper and using the platform it offered as leverage for the common good.

During Wilfred’s era as publisher, the power of the Columbia was harnessed, the desert bloomed to produce food for millions, industry arose, transportation expanded and the region prospered as never before. Wilfred had a hand in nearly every major development. He used the newspaper to promote public power, transportation and the use of the region’s plentiful natural resources. He served on the board of the American Forestry Association, the state Parks Commission, Washington State Historical Society. He served as trustee for Central Washington University and was a steadfast backer of Wenatchee Valley College. A lifelong skier, hiker and outdoorsman, he was instrumental in the founding of the Mission Ridge ski area and organizing group trips deep into the North Cascades wilderness.

A great lover of music, he established the Woods House Conservatory of Music and continues to support music and arts education through the Woods Family Music and Arts Fund. He led the coalition to finance and build the Wenatchee Performing Arts Center, and without his personal support the world-class performance hall would not have been built. He was instrumental in launching the Icicle Creek Center for the Arts, building the Wenatchee Valley College Music and Arts Center building and The Grove recital hall.

Wilfred R. Woods was born in Wenatchee, Sept. 30, 1919, to Rufus and Mary Woods. An older sister, Wilma, 2 1/2, and brother Walter, 1 1/2, had died tragically in 1913 after drinking tainted milk from a local dairy. He was raised with sisters Willa Lou and Kathryn “Kay,” mostly in the family home at the corner of First and Buchanan streets, two blocks west of The World.

Wilfred said his childhood was happy, free and idyllic, in a family headed by his celebrated pioneer publisher father. Rufus Woods in 1907 took control of the tiny daily newspaper at a dusty stop on the Great Northern Railway, gained international fame as the inventor of North Central Washington, the great booster, the bane of moneyed interests and the original supporter of Grand Coulee Dam and the Columbia Basin Project.

Wilfred Woods took work at The World offices at age 11, swatting flies that came in through open windows. In 1937 he was promoted to apprentice printer, at a salary of $12.50 per week, but his unionized coworkers walked off the job and he learned the intricacies of the trade largely on his own. The newspaper’s paid circulation was then 11,392. It would nearly triple by the time he stepped down as publisher.

Wilfred graduated from Wenatchee High School in 1937, studied at the College of Puget Sound in Tacoma, and served in the Army Air Corps from 1942 to 1946 with the first jet-powered squadron at Muroc Field in California. He returned to graduate from the University of Washington with a degree in history in 1947. He worked as a reporter and photographer for The World, covered the devastating 1948 floods, then left for Paris to study French and work as a foreign correspondent. He covered the Berlin Airlift in 1949.

In May, 1950, Wilfred was with his family in Toronto, where his father was consulting with executives of the provincial hydropower system. Rufus Woods suffered a heart attack crossing a Toronto street and died. It was only then that Wilfred learned his father had named him the majority stockholder of The World and its publisher.

Wilfred stayed in publisher’s position until 1997. His newspaper served readers from the Canadian border to southern Grant County, from the Lincoln County wheat fields to the Cascade Crest, an area greater than the state of Maryland. Circulation rose from 15,000 to 33,000 in his tenure. At times more than 90 percent of households in the Wenatchee area were subscribers, among the highest penetration rates in the country.

Wilfred teamed with his cousin Robert Woods, editorial page editor, and a team of carefully chosen executives to build the business. Wilfred several times shunned lucrative corporate offers for The World, preferring the newspaper life and the opportunities it brought him. To this day it remains one of the last family-owned and independent newspapers in the state and nation. Wilfred often attributed his success to his family — wife Kathy, daughter Kara, son Rufus, and daughter Gretchen. He was an outspoken, loving spouse, father and grandfather.

Wilfred designated himself as “a working fool,” which he often said every newspaper needed. No one who worked at the newspaper would deny the accuracy of that self-description. When not traveling, Wilfred was a fixture, his morning arrival announced by his unashamed, joyful whistling. Nearly every sentence was punctuated by his trademark, loud staccato laugh — “Ha, ha.” He would often walk up to an editor’s or reporter’s desk, smile and simply ask, “Well?” When satisfied by the answers and updated on employee family news he would retire to his cavernous, book-lined office and bat out his near-daily front-page column, “Talking It Over.”

The percussive sound of Wilf’s preferred manual typewriter danced over the drone of the newsroom computers well into the digital age. His column was quick, readable and updated readers on every imaginable topic — history, geology, politics, economics, music, literature. He wrote tens of thousands of columns, not ceasing until his last days. He often reported discoveries made during his insatiable reading. His intake was astonishing, often measured in books per week. He never stopped. His curiosity was unbounded and he possessed a sharp, analytical mind and archival memory unto his final hours. His personal interests covered history, archaeology, science, research and politics. He was a keen student of regional geology and was fascinated by the ice age floods. Well into his 90s he would lead tours of the Grand Coulee, making note of its unique geology and ending at the magnificent dam his father championed.

At The World, circulation and reach grew. Wilfred oversaw the conversion from hot metal to offset printing, publication in color, digital layout and typesetting, expansion of building and property. The World’s staff more than doubled. With business manager Jack Watkins, they created an employee profit sharing trust which provided for a comfortable retirement for hundreds of employees. Wilfred was known for his employee relations, and the result was a staff of workers reluctant to leave.

He stepped down as The World’s editor and publisher in 1997, turning leadership duties over to son Rufus and taking the title of chairman of the board.

While Rufus led the newspaper, Wilfred showed no signs of waning interest in the endeavor. He was at the office nearly every day, writing and reading, walking the 1.5 miles to the printing plant to take a copy of the day’s edition off the press. He skied and hiked vigorously until recently. He was a fixture at every community musical event of import. He often spoke with pride about the business and musical accomplishments of his children. His daughter Kara runs a strings program in Ellensburg and is an accomplished cellist who performs regionally, and daughter Gretchen is The World’s human resources manager and a gifted violinist with the Wenatchee Valley Symphony.

Wilfred was awarded Washington’s highest civilian honor, the Medal of Merit, in 2009. He and wife Kathy received the Legacy Award from the Wenatchee Valley Chamber of Commerce.

“Sometimes I am asked why I didn’t sell the paper. People know I received many offers,” Wilfred told interviewer Andy Dappen in 2005, during The World’s centennial year. “It comes down to a matter of journalistic pride. I’ve helped build a good paper and I am proud of it. I don’t think selling would produce a better paper — I believe the opposite is true. I’m also committed to making the region a better place to live. We are blessed that this is such a wonderful place to work, play, live. I see it as the responsibility of each one of us living here to keep it that way.” 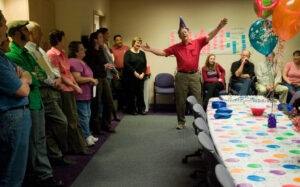 World file photo/Don Seabrook
Wilfred Woods celebrates his 90th birthday during a party at The Wenatchee World in 2009. 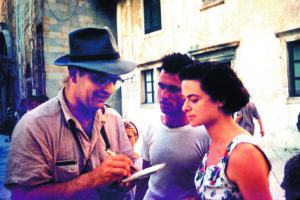 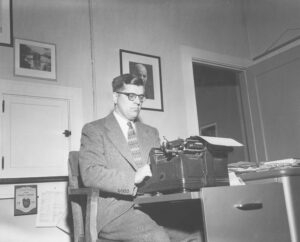 World file photo
Wilfred Woods at typewriter in 1954 at The Wenatchee Daily World.