A community-driven vision for redeveloping Kiwanis Methow Park in Wenatchee is underway and a preliminary sketch has been created, thanks to powerful collaboration between the Trust for Public Land and key local players including the Downtown Kiwanis Club, the city, and others.

What has been developed so far is an exciting vision that would take the park to the next level and build upon the important work of the Kiwanis club. When Kiwanis got involved with the park in the early 2000s, the park was not safe and was the source of lots of law enforcement activity.Through hard work and investment, the club redeveloped the park and it became a significant community asset. They gave the park back to the community. Former Kiwanis president Tom Irvin told me the club is excited about the changes for the park that this will enhance what the club contributed.

It is a unique park in that it has three separate levels. The new design keeps that tiered feel and adds some new features, including a bathroom, an expanded playground with temporary shade structures, and a revamped wading pool. On the lower level, a turf soccer field is envisioned along with space for a basketball hoop. The middle tier will have a shelter (kiosko), space for a splash pad, and an area for the weekly farmer’s market.

Methow Market owner Manuel Guzman has copies of the preliminary park design at his front counter. Customers, he said, have been excited about the prospect of have a redeveloped park in the neighborhood. He shows them the features on the map and let them take a copy of the design so they can get a better sense of what is being planned. Guzman told me it would be a wonderful improvement, especially having programs for music and other performances in the shelter, or kiosko.

Cary Simmons of the Trust for Pubic Land said the new park shifts from being a space where activities occur to a place of community with lots of potential for programming. TPL’s mission is to create parks and protect land for people and they do redevelopment projects all over the country. “Parks and nature close to home make a big difference in people’s lives,” Simmons told me.

The vision for the redevelopment of the park came from the neighbors. In talking to them, their idea of a valuable public space wasn’t just a square of grass and trees but instead a place to spend time and participate in activities and events, Simmons said. People want a place where multiple generations can be involved at the same time. Young kids could enjoy the wading pool on a hot day, while parents and grandparents enjoy a program at the kiosko and teens could play soccer in another part of the park.

Art is a significant part of this whole effort. Artist Terry Valdez has taken he lead in getting community members of all ages to contribute art ideas. Last weekend, about 75 people gathered to paint flowers that have been attached to fences by the community garden and the park. Lutheran outreach pastor Misael Fajardo-Perez has been a key leader in engaging the community and encouraging involvement among the neighbors.

TPL and the city are working with the Wenatchee Valley Museum and Cultural Center, the Numerica Performing Arts Center and other partners to think about potential programming for the park.

The redevelopment could be substantial – from $1.5 million to $2.5 million, Simmons said. Grant applications will be submitted to the Washington Wildlife and Recreation Program and the Land and Water Conservation Fund to help pay for the development. There will also be a community campaign to support this project. It is hoped that this redevelopment of Kiwanis Methow Park will be done in 2018 or 2019. Depending upon the funding, the project may end being phased, Simmons said.

One of the things that is unique about this park is the urban density that surrounds it. Within 10 minutes of that park, 4,000 people live. That’s a density that one would typically see in a large metropolitan area, Simmons said.

The beauty of this project is that it is being built with significant neighborhood input and with a broad collaboration of partners. It is a creative community-building project. TPL is facilitating the project but local partners are doing the outreach and providing the input to ensure that that the result is something that will enhance the neighborhood and the community.

As Kiwanian Tom Irvin told me, this project will take the great work of Kiwanis to give the park back to the neighborhood and add a whole new level of value to it for the community. 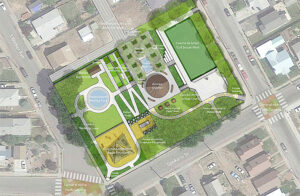 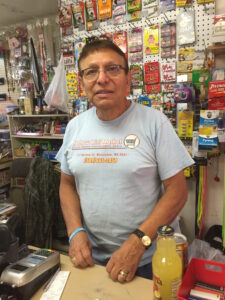