If you want proof of the power of how the Mariachi program in the Wenatchee School District changes lives, all you need to do is talk to students who are involved, hear their stories and listen to how they want to make a difference in the community and in the world.

At a time in this country when there is disturbing talk of building walls and sowing the seeds of fear and hate, we are indeed fortunate to have Mariachi Huenachi, a shining example of a program that builds bridges between people. We need to do less blaming and victimizing and more listening and learning.

Mariachi Huenachi is a unique, community-building organization that invites us to pay attention to the better angels of our nature.  Members of the group had quite a thrill opening up for nationally known actor and comedian George Lopez in Spokane recently. Lopez was performing at Northern Quest Resort.  “What a way to finish our year,” said Ramon Rivera, the director of the Mariachi program for the Wenatchee School District.

This is the second time that they have opened up a show for Lopez. Rivera told me that Lopez loves the fact that so many of the students are the sons and daughters of agricultural workers and that the program has been highly successful in exposing students to colleges around the region.

Mariachi Huenachi is unique in that it encourages students to aim for the stars in their careers and develop their leadership skills. As such, it is far more than just a music program run by the school district.

Rivera dropped by my office with two of his students — Pilar Cuevas, who will be a junior this coming year, and Esmeralda Mora, who graduated this year and is headed off to Washington State University in the fall.  Both young women are wonderful examples of how the Mariachi program positively impacts kids.

Mora recalled joining the program as a shy 7th-grader and that Rivera kept encouraging her and creating opportunities for her to develop leadership skills.  This past year, she was president of the group and took on the role of being a coordinator for this year’s Northwest Mariachi Festival, which for the first time was held at the Town Toyota Center.  Rivera described it as hitting the big time, and more than 400 performers were involved. There were a lot of new details to figure out and Mora played a significant role.

Mora said she was nervous and felt out of her league when Rivera pushed her to work directly with Town Toyota Center General Manager Mark Miller to make sure all the details were handled before the event. She said it was a bit intimidating at first, but that it was a positive experience and she learned a lot.

That is one of the magical aspects of the Mariachi program here. The program is about performing music, developing leadership and exposing kids to higher education opportunities. It’s about equal parts music, confidence and hope.

Playing in the Mariachi program has meant a lot to Mora.  It has connected her to her culture and to the Wenatchee community, she said. Also, she talked about the close-knit family environment of the Mariachi program because of the many days and nights they spend together traveling and performing.  Working together is a primary emphasis of the program. Mora said they have a Mariachi retreat every year to build that sense of cohesion and shared purpose.

She’s hopeful of going into nursing and would love to come back to the Wenatchee Valley and contribute her skills and talents to making this a great place. She wants to mentor other students, not just fellow Latino students, and encourage them to succeed the way that Rivera encouraged her. It’s a wonderful tribute to the power of this program.  Furthermore, Mora’s going to be the subject of an upcoming short documentary produced by Azteca TV of Seattle that traces her journey as a senior in high school. She has scholarships that will pay for most of the cost of schooling in the first year and was accepted at a number of northwest universities.

Following in her footsteps is Cuevas, who sings and plays the violin. She’s taken on a leadership role for the program in the coming year. She’ll be the activities coordinator and will be developing opportunities to develop cohesiveness among the members of the program.

At the end of the day, this program builds community among the students and the valley at large. The leadership opportunities that are thrust upon these students, and make no mistake about it, Rivera thrusts these kids into positions where they are uncomfortable so that they can learn, grow and achieve.

It’s why the Mariachi program is a prime example of a creative community building organization in our valley.

The Art of Community Project is dedicated to celebrating and encouraging creative community building in our region. 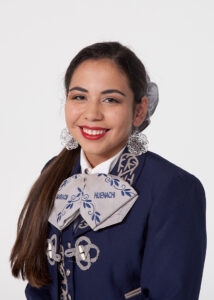 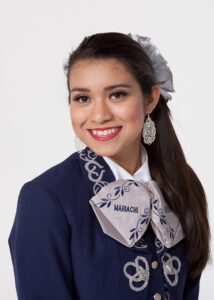 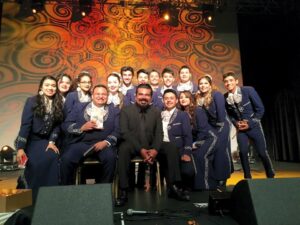 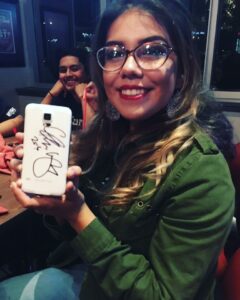 Vianca Guzman had her cell phone signed by Lopez 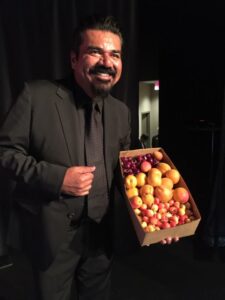 Wenatchee Valley fruit was a big hit with Lopez